Peter (81) and Alice (32) have been hanging out through Love Your Neighbour - which connects older and younger neighbours in their local community for company and conversation - for over a year and enjoy a rich, cultural friendship with regular trips to art galleries and exhibitions, but most importantly, the pair always find time for a good chinwag and a catch-up! In this blog, we learn more about their unique Love Your Neighbour journey and what makes their friendship so special.

“It started after the South London Cares choir in Peckham,” Peter explains, “We both caught the 37 bus towards Herne Hill; it was during the Catalan crisis, when they were going for independence, and we got chatting about that, speculating about how long it would be before it all came to a head.” Evidently, Alice and Peter had a lot to talk about, and during that first meeting, they covered topics as varied as politics, food and autism (Peter worked with autistic children for fifteen years).

The pair’s friendship continued to develop, regularly sharing bus rides home after choir and, eventually, in Peter’s words, “We hit on the idea of having a meet-up and decided to go to the pub, and basically that’s how it began. We didn’t get to talk much at choir because they want to make you sing, for some reason!”

Since then, they’ve enjoyed lots of diverse experiences: the pair have been to a Modigliani exhibition at the Tate Modern, the Space Shifters exhibition at the Hayward Gallery and, most recently, they paid a visit to Two Temple Place, which Peter describes as, “a spectacularly posh house built by William Astor in the late 1890s. His descendant, Nancy Astor, was one of the first women to get into parliament.”

“We saw an exhibition on the Jazz Age there too,” Alice adds, “We’ve also been to The Festival Hall and the free concerts they have there on a Friday afternoon. We even saw a modern dance performance where the dancer danced the architecture.”

“Yeah, the performer was expressing the nature of the architecture through the medium of dance...” Peter adds, with a wry smile. 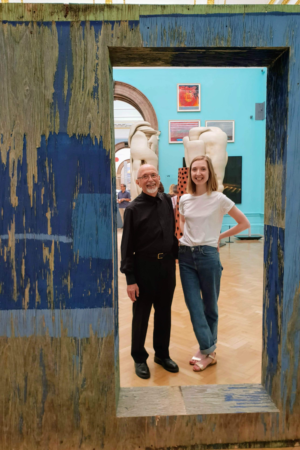 Although it’s clear to see that Peter and Alice enjoy being out and about, soaking up the abundant cultural experiences that London has to offer, they are keen to express that what’s most important in their friendship is the company and the conversation they share: “A lot of the time when we’re out, we just sit around talking anyway.”

Alice first became involved with South London Cares after moving down to London: “When I first moved to London, I had this big space left by moving to a city where I didn't have so many friends around. It felt quite a lot like starting again.” For Alice, South London Cares was a place where she could begin to feel connected to her local community, spend time with others outside of work and make close, long-lasting friendships: “With Peter, I’ve got a friend. I've found someone who I feel comfortable talking to. I’ve got someone who I might call if I was feeling a bit down or, if we meet up, someone I can talk with openly. I have a wider social network now than when I first moved, but it was so important at the start, feeling like I had someone where I didn’t have to explain where I’d come from and was interested in what I had to say.” For Peter, the effects of South London Cares and his friendship with Alice are just as important: “From my point of view, I was becoming isolated and I realised that my isolation also took the form of losing interest in other people. I tried going out with the ramblers: I came back and I was an expert on house prices and the ailments of people in their later years. So I went to the local University of the Third Age: it turned out to be just like the ramblers but sitting down. Then somebody said, ‘Why don’t you go and try that South London Cares choir in Peckham, they mix people our age with younger folk,’ and I thought, ‘Well, this is a good idea’. Within a matter of a few weeks, I’d learnt an entirely new vocabulary: I could talk about things like ‘IRL’! When Alice and I started talking, it was really good for me and probably in ways that I’m too close to be able to detect.”

Our Love Your Neighbour programme connects younger and older neighbours for long-term friendship and regular conversation. Click here to find out more, and sign-up to get involved. Oliver is the Programme Coordinator for Love Your Neighbour in Southwark, connecting younger and older neighbours for one-to-one weekly visits and longterm friendship. Before joining the team, Oliver worked for the British Red Cross’ Independent Living service supporting older neighbours returning home after a stay in St. Thomas’ Hospital.