At the start of 2020, I think it is safe to say that no one could have predicted what would happen only a few months later. The beginning of a new year often brings about the setting of new goals, time to plan some holidays and an opportunity for a chance to start fresh.

At the beginning of 2020 I had recently started a new job with The Cares Family working on a new intergenerational project, the 3G project.  The aim was to set up community social clubs in two London boroughs, connecting children under 5, their parents/carers and older neighbours (65+) together to share time, stories and build connections. We had carried out two social clubs and were looking forward to carrying out more in the month of March when the news of Coronavirus struck. With lockdown being enforced quite rapidly and in the nature of the work we do it was clear we would not be carrying out face to face clubs anytime soon. Therefore, it was time to re-evaluate and try to think of new ways where we could stay in touch with all those who had connected with us. 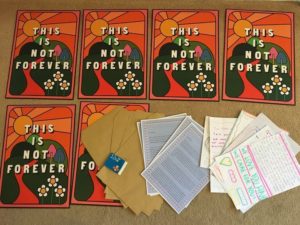 My role changed from not solely focusing on the 3G project but also working across other branches in The Cares Family and finding ways to support them. An #AloneTogether activity pack was created where there was a different task for each day of the month which was sent to all neighbours to get involved in.

Tasks ranged from ‘Try your hand at a new recipe today’ to ‘Think about a road trip you’d love to go on, where would you go, who would you be with and most importantly what snacks would you bring?!’ It was lovely receiving emails or seeing on social media different recipes neighbours were testing out, and knowing that so many people might not be able to see each other face to face right now but that we're all doing something together.

The responses inspired South London Cares to create a social club based on some of the themes from the activity pack, and from this the Thursday afternoon #AloneTogether social club was born. Since April I have been leading this group, and it has been such a lovely way to get to know older and younger neighbours across South London. I remember being a little nervous before the first one, as although I’m not that awful technically (well maybe a little), I didn’t have a clue what I was doing with sharing music over Zoom. I also hadn’t met any of the neighbours who were coming to the club and was a little apprehensive that they’d think who is this random new person but like with anything that’s new it’s always a little bit of a challenge but can also be exciting.

The theme for the first social club was ‘What are we grateful for’ in addition to choosing an uplifting song to share. I learnt that older neighbour David was grateful to have been married for 47 years to the love of his life who although sadly had passed he still cherished their memories every day and that Monique 75, who had always been against technology was now so grateful for it as it allowed her to connect with not only friends and family but stay connected to SLC too. Younger neighbour Natalie picked the timeless song ‘What a wonderful world’ and although we were all feeling uncertain about what lay ahead we were grateful for lots of little things and also for nature, family, friends and connection. 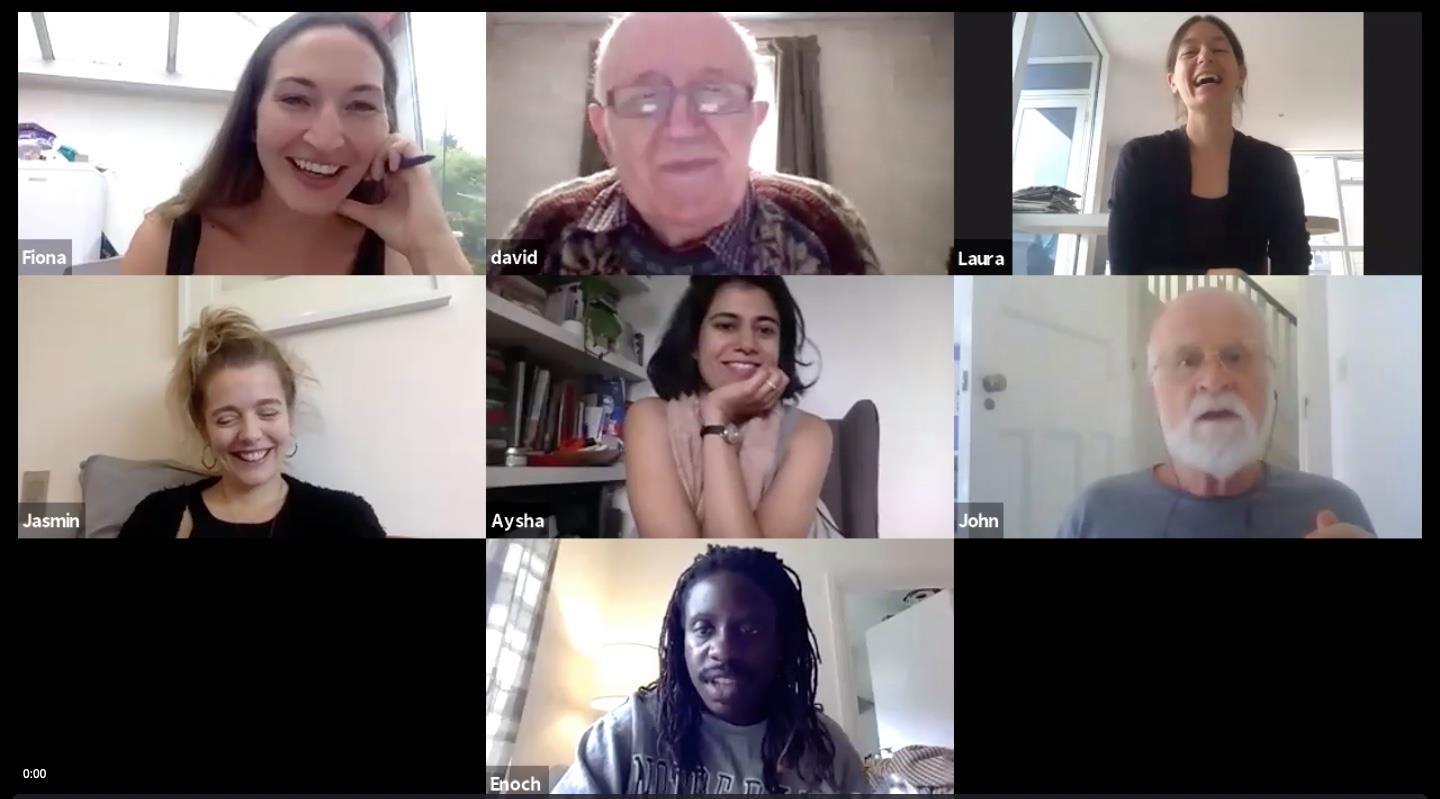 Over the past few months through the #AloneTogether club we’ve shared recipes, jokes, travelling adventures and stories from our school days. One of my favourite clubs was karaoke themed inspired. I went in thinking we would all pick a favourite song that we would choose if we were to sing karaoke and I would play it on Spotify. However, it turned into a lovely musical session where everyone ended up singing. Older neighbour David treated us to a powerful rendition of Maria from West Side Story, Deborah, 29, sang the wonderful California Dreaming by Mamas and Papas and Nathan, 25, played his guitar and sang a couple of songs (check out his website!). It was so uplifting and fun – it has encouraged us to go on and have a few other more musical social clubs.

Another afternoon which left me and many others in a fit of giggles was our club discussing adventures and sharing stories about those that we have been on. Andras, 30, was talking about going mushroom foraging at the weekend and suddenly Peter, 83, came back on screen with several books on mushrooms and gave us a lesson about the different types! I just loved it because it felt like we could talk about any topic and Peter had this magical bookcase where he had a book which covered absolutely everything. I feel that the #AloneTogether club offers everyone an opportunity to take it in turns to share and listen, which is really special. 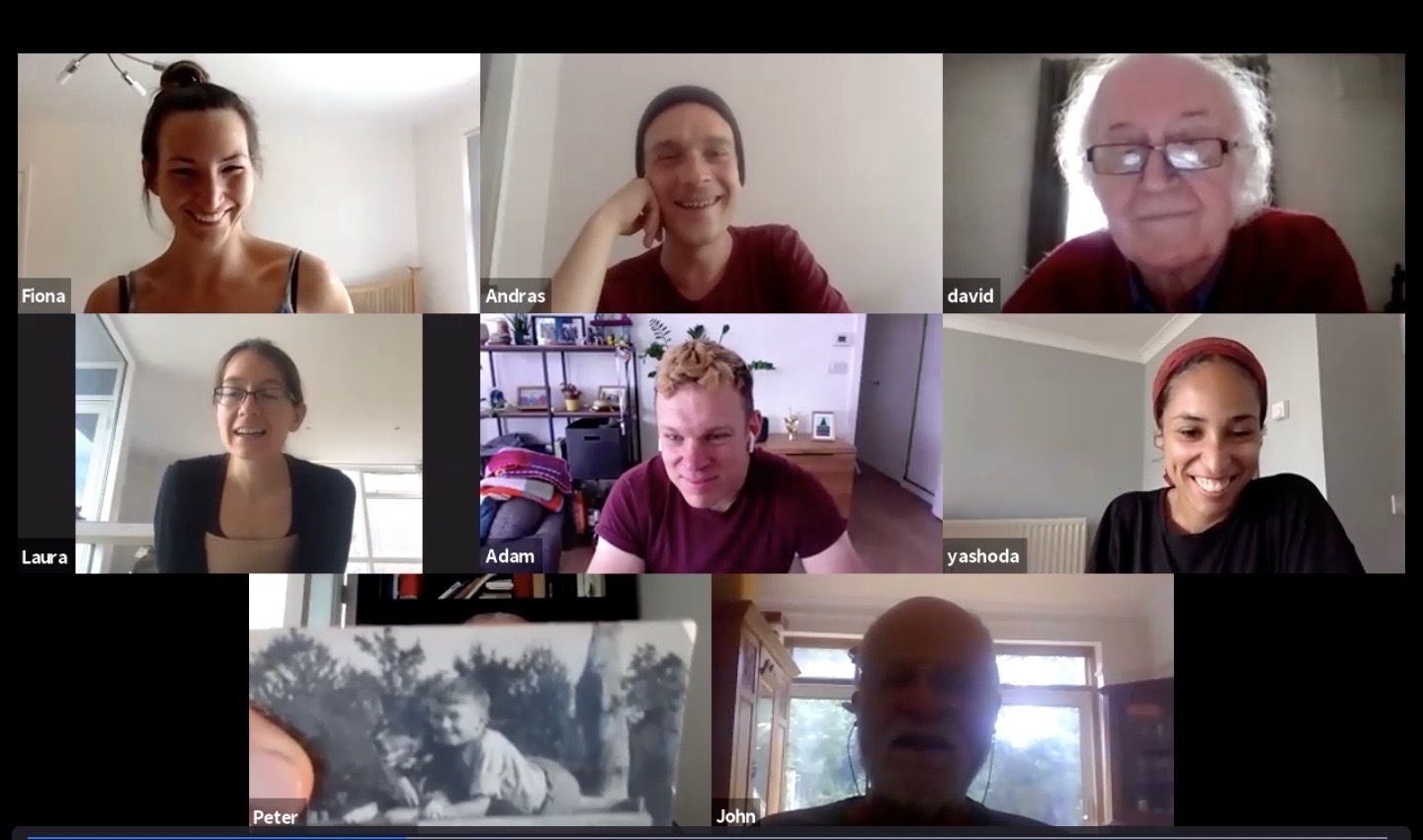 The club has been running since April and although I still haven’t met anyone face to face, it feels as though I know them and what has been so lovely is seeing the same faces each week too. Since April, 62 neighbours have came along and got involved at the #AloneTogether social club 162 times collectively. This is either via Zoom camera or dialling in via the phone.

There have been younger and older neighbours who have come almost every week, which has been so nice as it gives the opportunity to develop these connections deeper and learn more about each other. We can anticipate when David might quip in with a funny joke or when Aysha’s cat might appear in shot and it’s wonderful to have that familiarity. It’s also been a treat to share these stories and talents. In our poetry social club, both Peter and Sunjai shared the most beautiful vivid poems and Nathan treated us to some of his own songs on guitar. From this experience, Nathan will be leading his own 'Acoustic Hour' virtual club for his neighbours where he'll be taking requests for songs. We've also had several older neighbours come along to the 3G club on Friday's which has been wonderful and a great support. Peter's come along to the 3G puppetry workshops and told us he's loved puppets since he was a child.

There’s also been a few clubs where I’ve come away thinking oh dear! One being when I accidentally muted older neighbour Darrat ,69, and then put her in a breakout room, therefore, she wasn't able to join the conversation for a while. My wifi went completely down for a good 15 minutes during one club, and I thought I had lost the whole session (luckily Enoch came to the rescue!). And technically sharing music and pictures I’ve been as slow as a snail but it’s all in the nature of Zoom and learning a new skill – just like the neighbours. What’s been amazing is everyone’s help, patience and support throughout the past few months and it’s been a real pleasure running this group.

We don't know when our face to face Social Clubs will be able to run fully again but Zoom Social Clubs have demonstrated how we can still share stories and connect in the virtual world. Perhaps, when we do meet face to face, we can all have a sing-along or who knows with our newfound knowledge of mushrooms, could go foraging!

The #Alonetogether pack is an opportunity to complete fun tasks and connect with one another. If you're interested in getting involved, you can download and share it from here.