Finding a ‘new normal’ is a repeating theme of life: leaving school, new relationships, changing health, moving towns, cities or countries or starting a new job. All of these new happenings can lead to discovering and being a part of a new community.

The population of my homeland (Aotearoa, New Zealand) could fit into London twice over.

I always knew the move to the ‘Big Smoke’ would be an adventure. Anything you dream up, you can probably find in this pulsating city, with its endless choices of theatres, travel opportunities on my doorstep, the food, the pubs and the history. Settling in, however, finding my own ‘new normal’, was difficult. Everything was moving, everyone was busy and it could take months to pin down people for a catch up. Connecting with where I was living and feeling grounded in South London was also trickier than I imagined. At first I was very much lost and feeling isolated within the hustle and bustle. So, what did I do?

I found ways to meet people by participating in creative spaces that brought together disparate (yet similar) groups. I became a part of the Community Company at the Old Vic Theatre, collaborated with other younger creatives at The Albany in Deptford, performed on the stage of the Young Vic as a part of their community chorus and crossed the river to Bethnal Green to sing in an acapella group. These activities all sound exciting and exuberant (and they are!), but it was the people who I met along the way that led me to feeling a sense of belonging in London. 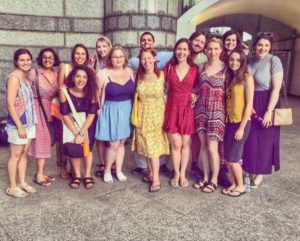 What is the most important thing in the world?

With each new personal connection I made, more of my community uncovered itself, and more of the intricacies of life in London became clear. I believe that places are constructed through the eyes of the beholder and I love learning how others view a street differently or interact with a city in another way. 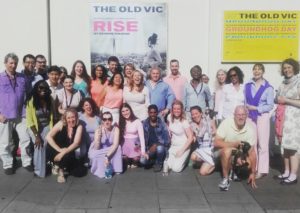 Our South London Cares community is furthering my London education in this respect. Dave (36) knows the best routes of London for travel by motorbike, Yvonne (70) has shared with me the best way to make friends with a squirrel (and other critters of the city), Stephanie (30) and Roy (74) have enlightened me as to the best local pubs in my neighbourhood that I’ve yet to explore and Derek (84) has drawn my attention to the somewhat hidden Bermondsey Antiques Market which happens every Friday and the treasures that one can find there, uncovering even more about the streets of London past and present.

Ultimately, every interaction I have had so far has taught me something new about the patch of London I call home and has helped to make me feel even more connected to those I share this space with. I am delighted to be a part of the South London Cares community and leading on our Love Your Neighbour programme in Southwark. It’s been a joy to meet some older and younger neighbours in Camberwell, Bermondsey and London Bridge, so far, and I can’t wait to get to know more!

Emily leads on our Love Your Neighbour programme in Southwark, connecting younger and older neighbours for one-to-one friendship. South London is her treasured home since arriving from New Zealand. When she’s not enjoying shows at the Young Vic or Southwark Playhouse, you can find her seeking out music, creative events, cheap eats or even wandering the beaches of the Thames, spotting pieces of histories as the mud reveals them.