In celebration of National Intergenerational Week, we’re speaking to Phone a Friend match Jane and Sarah*, whose friendship has spanned both generations and social distance over the last 7 months.

Last April, South London Cares launched our Phone a Friend programme, initially as a short-term pilot to connect more neighbours for the remaining months of lockdown. Almost a year on and 36 phone matches later, the friendships that have grown out of the programme have brought our community company, conversation and laughter during a scary and isolating time.

The match between older neighbour, Jane, and younger neighbour, Sarah, is a wonderful example of a friendship that’s been forged during the year we’ve spent apart. The pair were matched up on the programme back in June, and have been calling one another every week since. It’s a strange time to make a new friend, with all the limits on socialising, and a slightly unorthodox way of meeting someone too. When we asked Jane and Sarah what made this friendship different from the others in their lives, Sarah noted: 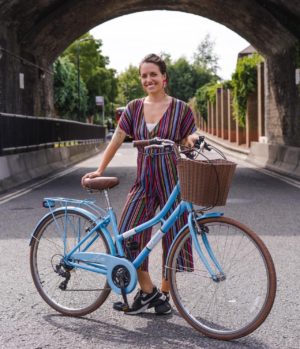 “I guess obviously the main thing is that we've just met on the phone, which is really cool, because I feel like in our day and age when we meet anyone, we'll get them on social media, and I’ve been speaking to Jane for seven hours of my life and have no idea what she looks like! It’s cool because it feels like an old-school way of making a friendship... I think it's meant that we’ve had more genuine time to have conversations.”

Within these conversations, the two have learnt a lot about each other, and have discovered they have more in common than they’d initially thought. Jane lives in Dulwich, just a short cycle away from Sarah’s flat in Streatham Hill. Jane's career was in the marketing and advertising business. Sarah now works in the same field for a large London-based brewery, something which fascinates Jane. They even recently discovered that Sarah’s friend is working at the same brewery as Jane’s cousin!

“I find it quite extraordinary, really, because there is an enormous age gap,” Jane commented, “but that doesn't seem to come into it for me. We take each other on face value and I do really care for her. I care for what happens to her and how she's coping, how her husband is coping. It's all part of friendship, really.”

Their friendship clearly means a lot to Jane. Like many of us, she had a hard time over Christmas, so was overjoyed when she found a baked treat on her doorstep, which Sarah and her husband had dropped off during one of their city bike rides. Having moved from Canada’s underpopulated capital, Ottawa, to the bustling streets of London, Sarah has adjusted to what she described as “a very different lifestyle, super fast paced”. She’s enjoyed the opportunity over lockdown to slow down and explore south London’s green spaces. 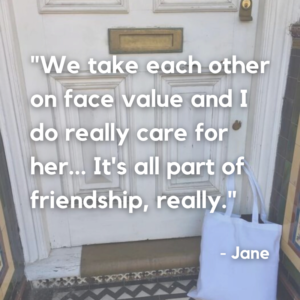 For Jane, the fact that Sarah is away from her family makes their calls all the more special, because they’re “making a difference for her as well”: “I admire Sarah because she's come away from her home and she's settled so well in this country and is enjoying London and her marriage here as well… it's lovely to see it all coming together.” Meanwhile, what Sarah admires about Jane is her patience, having been housebound for almost 12 months: “I think you've handled everything this past year so well,” she said to her, “I think having that attitude where it's just like ‘This is the situation we're in, and we have to do what we have to do with it’ has been really inspiring.”

With vaccinations and easing restrictions, we can finally see a light at the end of the tunnel, and Sarah and Jane can’t wait to start meeting up in person. In the meantime, we’re still looking for younger neighbours to join our Phone a Friend programme, particularly in Kennington and West Norwood. If you’d like to form a friendship with someone like Jane, simply fill out this form or get in touch with our Programme Coordinators, Lauren (Lambeth) and Eleanor (Southwark) with any questions.

*names have been changed to protect personal information

Lauren leads our Love Your Neighbour programme and new Phone a Friend programme in Lambeth, connecting younger and older neighbours one-to-one for weekly visits or phone calls, and longterm friendship. Previously Lauren worked for a national education charity, and at her local pub in Clapham.