Our neighbours are the core of our existence. As well the motivation for our work they provide us with critical insight into the effectiveness of our programmes. So, towards the end of 2020, we surveyed our younger neighbours to gain their thoughts on various aspects of our Virtual Social Club programme. 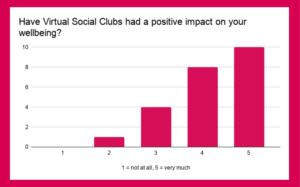 "Seeing older neighbours connecting with others via new technology, and being able to keep in touch during a very lonely and strange year!"

Many brilliant quotes were provided, some of which you can find in this short, light-hearted animation. 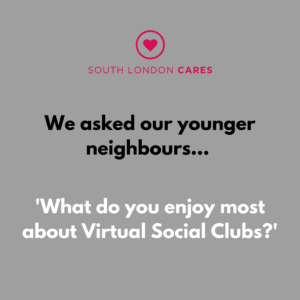 There were a few common reasons for younger neighbours not attending as many clubs as they'd like: clubs being fully booked, times of the clubs not being suitable, not having the time, and Zoom fatigue. On that latter matter...

"I'm Zoom fatigued but not in regards to SLC, more work and talks so I've tried to limit them to 1 or 2 a week."

Despite some online overwhelm, the overall feeling about clubs was very positive: "not sure you can improve anything"; "thank you for putting them on! I must admit I always feel a little sad when a session ends".

We have already started to introduce a number of these ideas. Before Christmas, younger and older neighbours enjoyed a tour of the 'Hot Pink Turquoise' exhibition at South London Gallery. We are a running a cooking class at the end of January, and our Volunteer Celebration Evening culminated in a competitive game of Catchphrase! 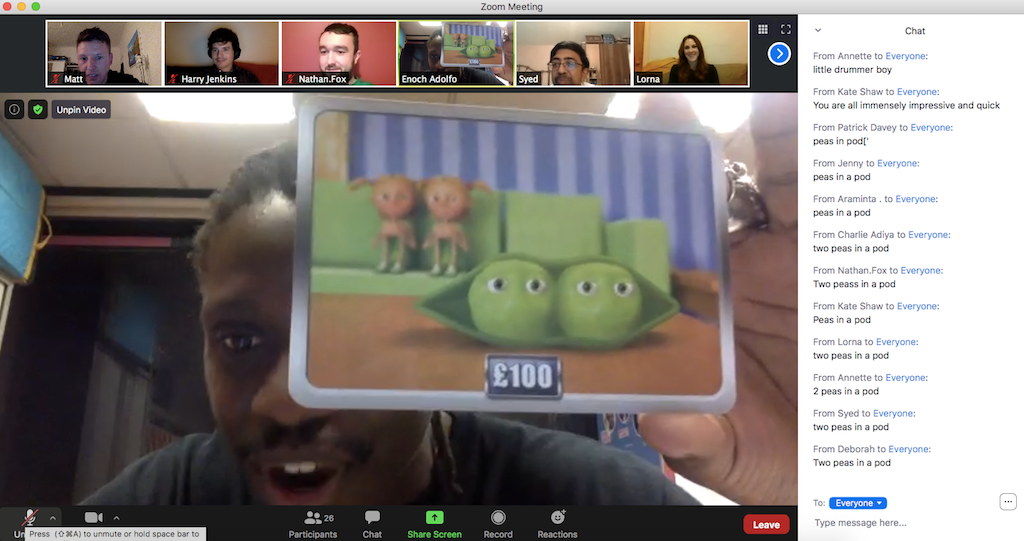 Some improvements were also thoughtfully suggested. One common request was having more clubs in the evenings so people could attend after work. The majority of other ideas related to creating and enabling more discussions. Ideas included asking individual neighbours questions, utilising breakout rooms more often, paired activities, and allowing time at the end of clubs to share thoughts and highlights.

"Maybe some paired activities to feel like everyone has more opportunities to be heard."

These recommendations have been brought into our work. Older and younger neighbours are now more frequently spending time in one-to-one Zoom support calls, and in breakout rooms at our Tech Workshops. This month we also ran our first club held exclusively over the phone, which led to some wonderful conversations like this one involving Abi, Anthony and an unusual favourite animal!

To support us with our anti-racism work, we asked neighbours to tell us how safe they feel at our clubs (i.e. how comfortable they feel to be themselves and share their thoughts and opinions freely). The mean answer was 4.7 out of 5 (very safe).

We also asked how inclusive people feel our clubs are (i.e. how well-represented they are with regard to race, religion, culture, class, gender, sexual orientation, and ability). This time the mean answer was 4.2 out of 5 (very inclusive).

"As a mixed-race woman, I do feel safe at your events and love that there is always a diverse group of people in attendance."

Additional reflections were also provided, and can be summarised as follows:

"As a volunteer, I think it would be helpful to have some strategies to address any racist behaviour by neighbours — I feel like I have gotten a lot of resources from other areas in my life on examining my own unconscious biases and participation in racism, but I don't really feel comfortable calling it out when I see it in others, especially [older] people I don't know well. At the same time, I recognise I have a responsibility to do so."

In response to this, we now start all clubs with an explanation of our policy and processes on anti-racism and inclusivity, and have created an Educational Guide to share with neighbours who want or need additional support. Our anti-racism work is ongoing, both internally and externally, and input from everyone in our network is a vital and appreciated part of our journey. 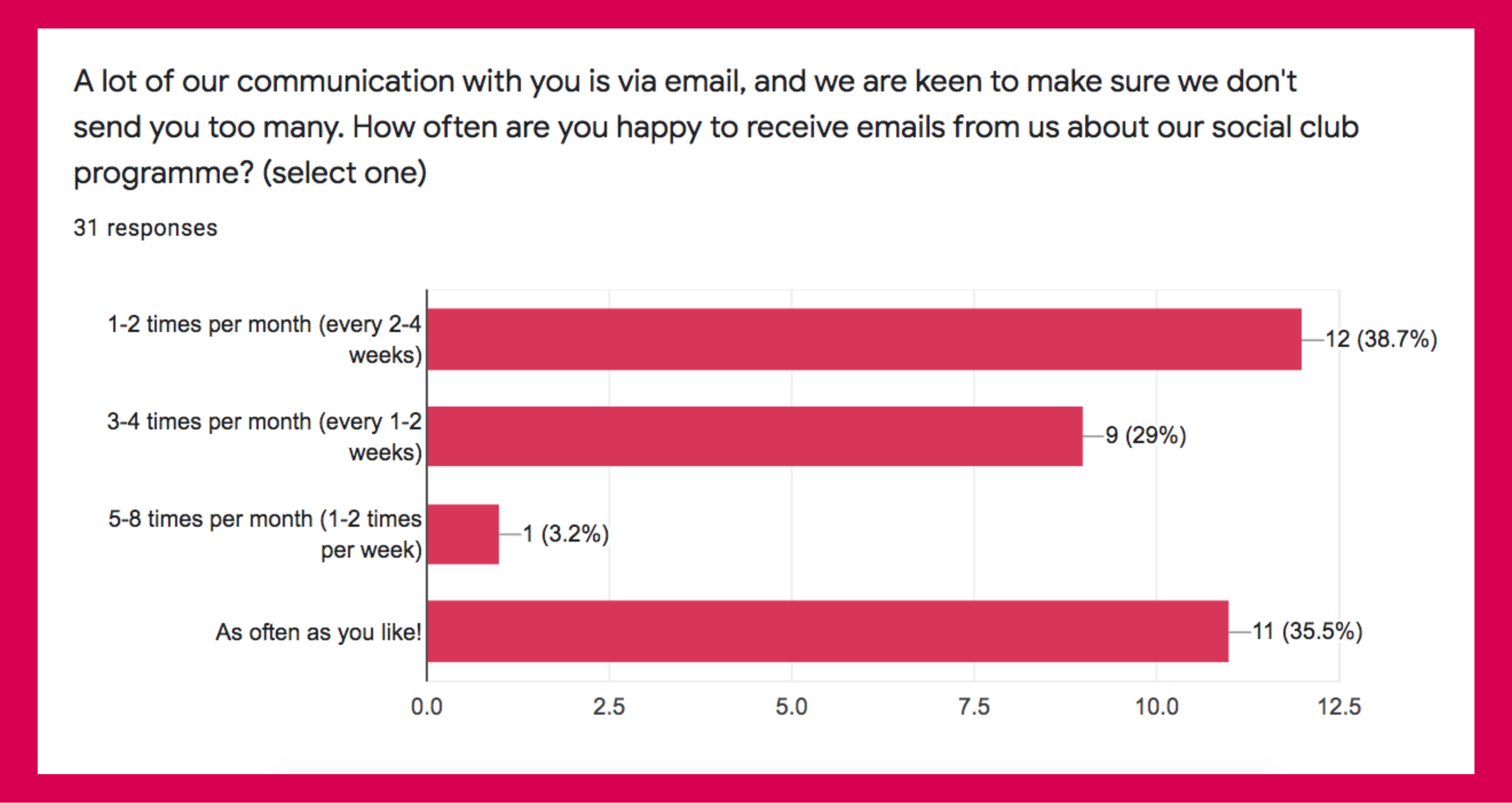 The last section asked how often younger neighbours are happy for us to communicate with them. As can be seen from the graph above, there was a bit of a split!

On the back of this feedback, we now send our club booking emails every two weeks, providing two opportunities per month to secure a place. We have also sent a few last-minute booking invitations, which were so well received they have been requested more frequently.

Since making the above changes we have seen an increase in attendance of younger neighbours at clubs and fewer cancellations, so the impact has been really positive.

A big thank you to everyone who was able to respond. We truly appreciate the time and efforts of our community, not just with the survey, but with everything you all do. The last 10 months have been incredibly tough but younger and older neighbours are proving to be crucial and enduring support for one another.

"I miss seeing everyone face to face, but the zoom social clubs have been a great way to keep in touch and raise spirits!" 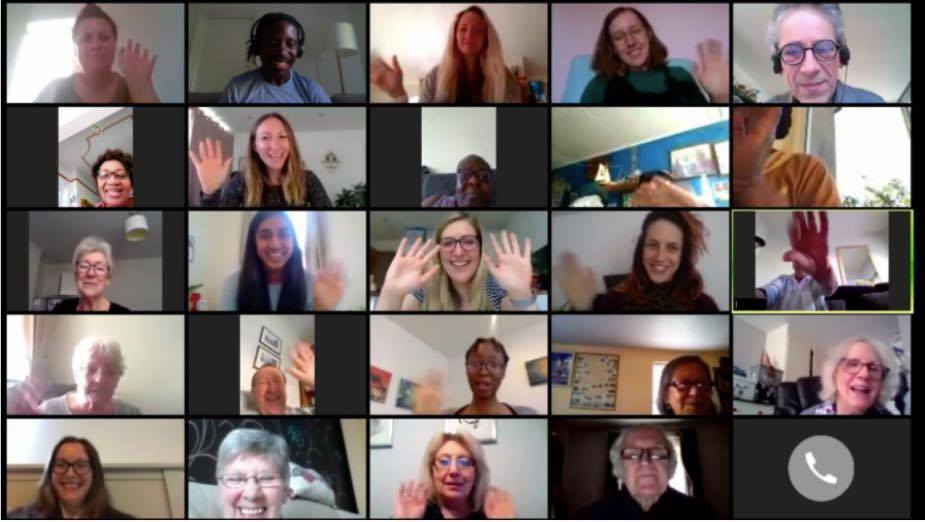 We continue to proactively seek feedback from our network in order to improve what we do. Our current 'Re-engagement' project involves asking older neighbours for their input on our Virtual Social Clubs and #AloneTogether Activity Packs and, just like our that of our younger neighbours, it is proving invaluable! Maybe a blog for the future...

If you'd like to share your thoughts or get involved in our programmes, please email [email protected].

Matt manages our growing volunteer network, and leads on reaching older south Londoners - introducing them to South London Cares and our programmes. Previously Matt worked as a Personal Trainer in various parts of London, and before that was an officer with the Metropolitan Police.